on March 27, 2011
Well, this weekend did not go as originally planned. First off, our trip to Tri-County Sports, in VA, did not happen. This weather has been so insane that our trip had to be rescheduled for next weekend. Virginia got hit with a bad rainstorm a few days before the tournament, so it was best to just move the trip. Now I'm hoping for 60-70 degree weather next week....I'm keeping my fingers crossed :)

So, now that we are in town for the weekend, Triple A Arsenals get scheduled to play their opening day game for today. The day was beautiful, a bit chilly in the shade but when you sit under the sun it was great! We were home, so we played at Miller Stadium and we were happy....atleast I was! Game started at noon as scheduled, and then 30 minutes later, everything is ruined by the idiots that run our town's recreation department! We are told that the "proper paperwork" was not filed and therefore our kids were not authorized to play at the stadium. Now that was all total BS and I insist that its personal issues behind all this. I really hate when people with power use that power to fight personal battles....I mean, everything was filed and we should've been allowed to play, but NO! They would've called the cops to get us out if they had to, so we had no choice. I've never seen this happen anywhere, and it is so embarrassing for the town, I don't understand how this person didn't see how wrong he was! So now, after only 2 innings, we have to pack it up and go home, and our opposing team drove an hour for nothing....totally ruined the day for all of the kids who were playing!

Saddest part is that after complaining, all I got from the head of this department were excuses! I think WNY needs a new head for the Rec. Department!! There are no excuses when you kick out your own town's kids from playing on a field that wasn't being used.

Unfortunately, it was a short game, but I got my first few pics of the season.....then came back home to eat pizza from Pizza Hut....who can diet after that aggravation! 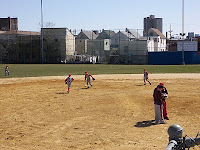 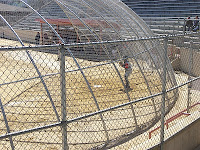 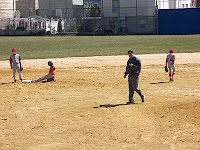