on August 02, 2012
So it was Thursday afternoon when my hubby, Laz, calls me at his usual time to talk.  I didn't suspect anything because we talk several times during the day, but this day he had news that he knew would really make me happy! His job had finally approved his vacation, which would begin that Monday!! YES!!! Then the other news...."let's go to Florida"....I was like "WHAT? Are you sure?"  I had spent the day before calculating whether we should go away or stay in town if his vacation were approved....if you saw my earlier post Vacation To Stay or Go Away??? you could see that going away would actually cost less.  Laz does not like to stay home all day....he gets bored so we would have spent money going places.  Everywhere we go here in NJ costs money!! So, the decision was made....Florida-here we come!!!
Now as soon as I hung up, I started pulling out the suitcases and taking out clothes for our trip.  We would be leaving on Friday night so I needed to start right away.  I packed as much as I could on Thursday, then got up early on Friday and headed out to Walmart to buy snacks for our trip!  Got back home and finished packing!!
Laz got home around 3, but he had to change the oil on his truck....so he did that, loaded up the truck and we headed to South Jersey to stop at his sister's house.  I have a few house plants that would die if I left them here, so we decided to leave them with his sister.  My cats were good for the week, I filled up 2 automatic feeding containers for them and one of those jugs of water....besides that my hubby's niece lives downstairs and would check in on them from time to time, since she was already taking out and feeding our dog.
We got to my sister-in-law's house, ordered pizza and hubby took a nap.  2 hours later, we got back in the car and took off!! It was 10pm, I was tired but couldn't sleep, besides that I wasn't too sure how rested Laz was.  I'm always scared that he'll fall asleep driving.  Somewhere in Baltimore, around 1am, we stopped at a secured rest stop and went to sleep....neither of us could go on.  We were exhausted and we weren't in a rush so we stopped.  Here we slept for 3-4 hours, I slept more-when Laz was fully rested he started driving and I have no idea what time that was!
Everytime he stopped for gas, we would take our bathroom breaks and if we were hungry, we get something.  Somewhere in North Carolina we stopped for lunch, which we didn't have to buy thanks to me!!  I packed some cold cuts and bread, so that is what we had for lunch.....then kept going.  I have no idea what time it was when we finally entered South Carolina, but I was sooooo happy to see South of the Border.... 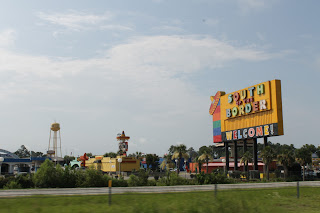 I don't know why, but passing South of the Border always makes me feel like we are almost in Florida....never mind that we still had hours & hours of driving....but always makes think we are close...until we hit Georgia! 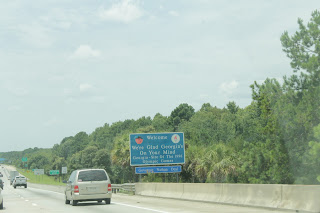 Now I feel like the drive is never ending and I start complaining, to myself, I don't complain out loud since its always my idea to drive down & Laz will make it a point to remind me of that :)  So, I just grin and bear it!! 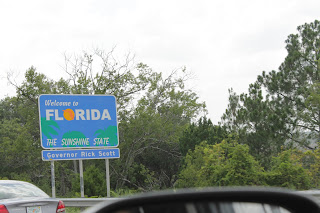 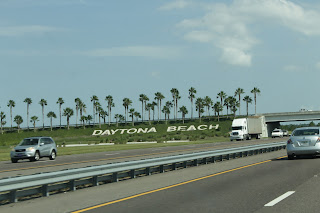 Somewhere after passing this, I started to have terrible stomach pains and feel nauseous.  I really tried to make it to my father's house without stopping, we were so close, but I couldn't.  So we stopped at a rest area so I can go to the bathroom and puke!! Lovely way to start a vacation isn't it!!  The pain was sooo bad, I made myself puke thinking it would make me feel better, and it did for a bit.
While I was in the bathroom being sick, my daughter made a little friend.......... 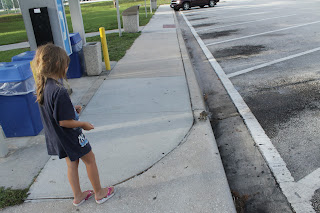 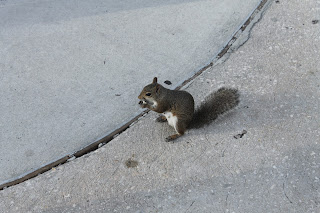 This squirrel was really friendly!!! So cute!!
Now we kept going and in an hour we were finally at my dad's!!  My sisters were there with their husbands too and we saw everyone that night....it was great.  We ate dinner, and I still felt horrible!! Took some antacid stuff, eventually puked again, showered and went to bed!!
Florida 2012 trip report