on August 13, 2015
Ugh, double digits....yes, baby girl is 10!!!  Where has the time gone????
She was sooooo happy to be turning 10, she's feeling so much older now, LOL!!
Her birthday is a bit tough to celebrate due to it being right in the middle of the summer.  Everyone is on vacation!!
We cut her a cake at home the day of her birthday, and she had a friend come over to celebrate for a little while.
She loved it!! 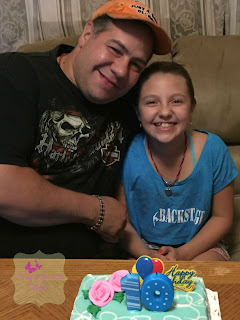 Then, I was planning to have a birthday party at American Girl for her, but she didn't want that.  She wanted a trip to NYC and American Girl with just me and her dad - family only, as she puts it!  She's so sweet :)
Well, she got her wish.  I made reservations for brunch that weekend and it was only the 3 of us.  Now she didn't mean to exclude her brother, but we all know he would refuse to go.  I asked him anyway, and he looked at me like I had 3 heads!!  What on earth was I thinking - why would he want to go to a little girl's store - yea, that was his response so brunch just for us 3!
Saturday morning we jumped on a bus and headed into the city.  We were running a bit late, so when we got there we had to almost jog to the American Girl Store.....wow, my feet were killing me!!

We got there just in time!  We made the line and only waited about 5 minutes before the started letting everyone in.
Food was good, we had cinnabons, then we ordered our entrees - I had the egg scramble (forgot the name), Kat had pancakes and hubby got French toast.
After we were done, we had dessert!!  A little flower pot - chocolate mousse....mmmmmm, so good!! 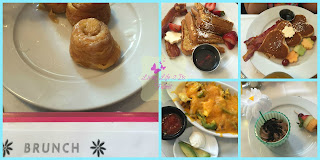 Once we were done eating, it was time to go shopping.  Part of her Birthday gift was to pick out her new doll - which ofcourse was the Girl of the Year: Grace!!
Along with the doll, she got an outfit and a charm bracelet to match Grace's. 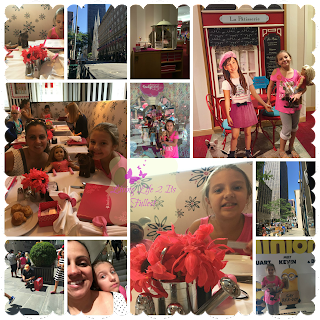 After shopping, we walked back to the bus stop but not before stopping at the Disney Store, the NBC Store to check out the Minions and enjoy our surroundings - even if it was just for a litte while!   I do have to say, hubby was a trooper!! He hates walking in NYC but he did it for us!!  We love him so much :)